Our last night in Naoussa already ~ where does the time go when you plan a vacation for almost a year and then it slips away before you know it!

Pandelis, the very kind guy at our hotel, who has been our guardian angel since we got here, made a reservation for us at his favourite restaurant in Naoussa tonight.  The card I have from the restaurant is in the Greek alphabet, so I can't even tell you what it's called in English, but I can say that it's one of the best meals that we've had in Greece so far.

But before we get to dinner, let me tell you about the little bar we went to, called, appropriately enough, The Bar. After walking around Naoussa for one last time, we ended up at this very cool bar which just opened a few months ago, for a pre dinner drink.  We couldn't resist the blues playing from inside and the cool blue lights and cushioned seating which beckoned us from outside.  Den has a caprihana and I had a red wine and we spend almost an hour just chilling to the cool music and talking to our bartender/owner who is Polish but has been living in Paros for almost 7 years.  They just opened The Bar and we wish them much success with this relaxing, inviting spot. 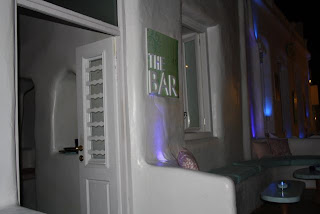 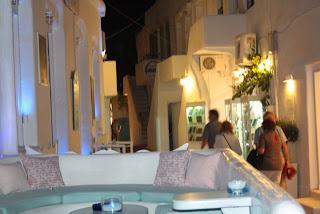 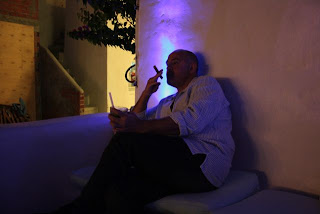 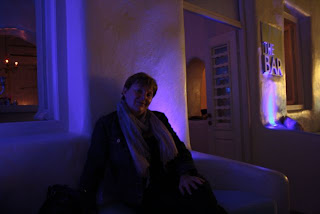 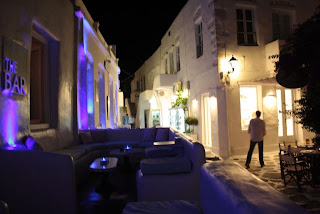 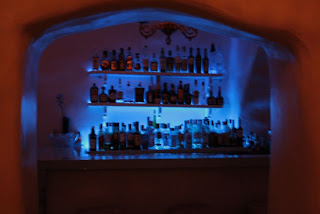 Dinner was just around the corner and our table was waiting for us when we got there just before 9pm.  It's another tiny space which you would need to look for ~ we loved the white decor and the soft jazz playing in the background, but the food took it way over the top.  The waiter/owner told us to just order one appetizer with the 2 daily specials and we had a peppery red wine blend of Cabernet/Merlot from Macedonia which complimented our meal very nicely.  Our starter was fava beans baked in the oven, which was really a fava bean puree with an eggplant base and this doesn't even begin to describe how good this dish was.  Den has a veal schnitzel stuffed with ham with a blue cheese sauce and I had a pork shank with mushroom sauce.  My pork was fall of the bone tender and Den devoured his plate completely, so I guess he liked it as well.  We were given complimentary desserts which were like a tiramisu but with raspberry jam in the middle ~ it was the perfect accompaniment to the rest of our wine. 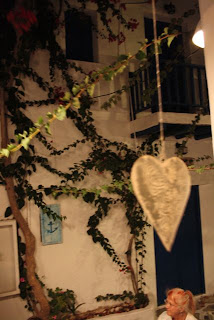 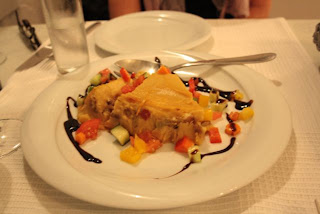 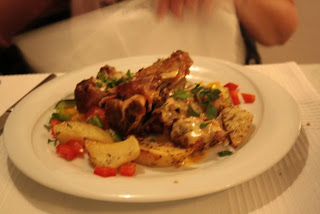 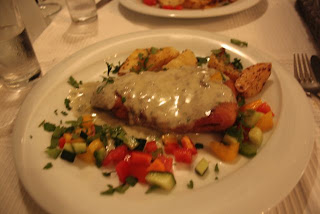 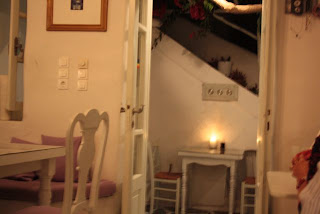 Dinner was an unbelievable 40 euros!  We ambled back to our hotel and I'm now blogging with the patio doors open and the sound of the surf as our background.  Tomorrow we take the ferry to Naxos where another adventure beckons us.  Life doesn't get much better than this. 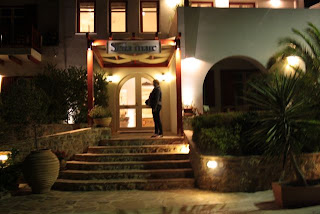