Exploring Naxos and relaxing on the beach

We opted out of making the trek to the nude beach today because I had read that it was supposed to rain.  I was up around 7am and took the time to finally post my first real blog entry since we got here on Friday afternoon.  Den woke up a little past nine ~ I was surprised that he got up so late since he is usually awake around 5 am and then I found out why ~ he stayed up in the middle of the night watching his Detroit Lions play football on the internet!  What is it with men and sports!!  Ah well, we still made it to breakfast in plenty of time and enjoyed our traditional yogurt and honey, cheese pies and delicious homemade spice cake.

We decided that we would walk to town and take the time to explore the Portara, which is the most recognizable monument in Naxos.  It dates back to 530 BC and is all that remains of a temple that was never finished due to a war with Samos.  We tried to visit it last year, but the evening that we walked over to it, the waves were crashing over the walkway linking it to Naxos and we were afraid we would get swept out to sea.

We spent about an hour at the site, climbing right to the top in the hot midday sun.  We were rewarded by magnificent vistas in every direction and a sea so blue, it almost made me weep.  Den took his many pictures and swore under his breath for not bringing his larger Canon SLR.  He made me promise that we would come back at dusk one evening so he can get some sunset shots with Naxos in the background. 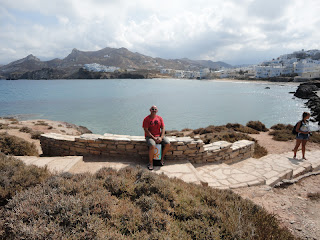 We walked back to the old town and explored more of the little streets.  We happened upon an exquisite tiny restaurant called Labyrinth which seemed to call my name and we made dinner reservations for tomorrow night. We continued walking the maze of alleyways and passages until we ended up back at the beginning of the port area, where we stopped for some chicken souvlaki pitas and a shared Greek salad (we can't get enough of the feta and tomatoes here). 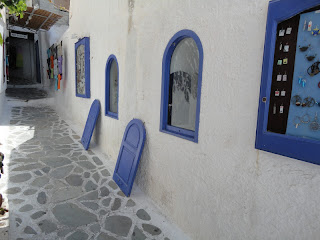 After lunch, we walked back to the hotel for a little rest after walking in the sun for almost 3  hours.  We decided to walk over to St Georges beach, just a few minutes from our hotel.  It's a very nice sandy beach, very shallow with clear water, perfect for families and children.  There are lots of tavernas and bars along the water and we rented a couple of beach chairs and whiled away the afternoon, going in for a dip whenever the sun got too hot.  We stayed until about 6pm and ambled back to the hotel for showers.  I'm now sitting on our little balcony, enjoying the balmy night air and blogging before we go off to dinner.  I think we may go back to Maros and then for some more loukamades, with honey this time! 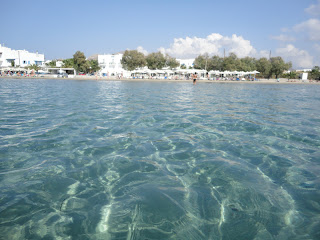 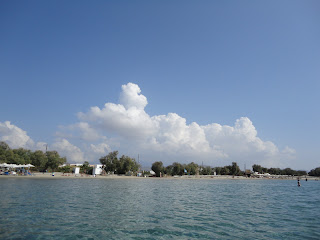 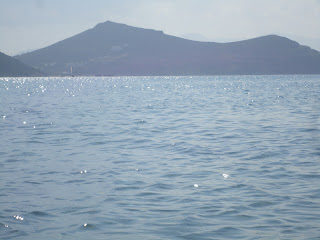 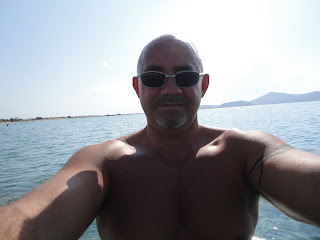 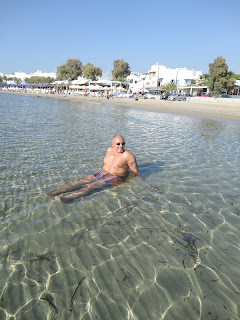