A food expo, meeting someone's mom and urchins for the first time!

We were fairly lazy yesterday morning ~ Den went to get some croissants and pain au chocolats and we nursed 2 cups of coffee and listened to FM 102.3, a great Paris radio station that plays mostly classic rock, thus perfect for an old broad like me! The apartment has a great sound system, with speakers hooked up from the beams on the ceiling, delivering clear, crisp sound.

Since rain was forecast for Thursday, we decided to do something indoors. There were a few art exhibits I had read about (the Stein exhibit at Le Grand Palais and Edvard Munch at Beaubourg) but in the end we stayed true to our roots and opted for a food exposition at La Porte de Versailles conference center way in the 15th.  We had visited this huge combination of buildings last year when the bi-annual Paris Car Show was in town, so we knew how to get there.

The exhibit was called Cuisinez avec M6 and is being held in Hall #2 until October 9.  M6 is the French equivalent to our Food Network and many of the celebrity chefs were on hand, giving cooking demonstrations on air as well as offering smaller classes which you had to pay for (I think).  In addition, there were lots of producers of wine, champagne, foie gras, charcuterie, chocolate, spices, cheeses offering samples.  There was also kitchen wares suppliers, from knives, mixers, beautiful stoves, aprons, food preparation products, and lots of cookbooks from all the various celebrity chefs and other well known chefs.  I almost bought a beautiful book on Parisian restaurants and bistros from Alain Ducasse (well, not from him personally, lol) but it was so big and heavy that I was worried about our luggage allowance and sadly had to pass.

We spent about 3 hours wandering around, tasting and chatting, watching some demonstrations and really enjoying ourselves.  There really weren't too many tourists at this show since it is geared to the locals who watch the TV shows, so it was a fun way to mingle with locals in a totally different atmosphere. 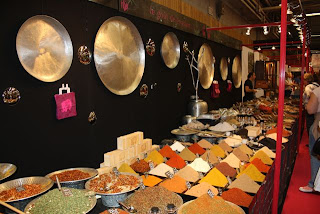 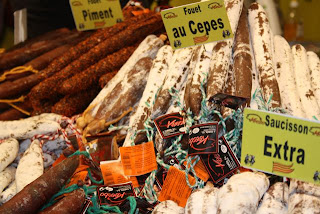 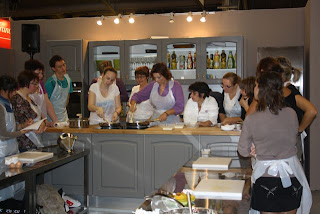 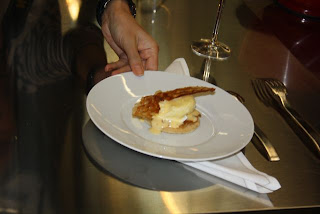 We left the expo around 2pm, planning to walk along rue de Vaugirard to find a little place for an easy lunch, but it was quite windy and spitting rain, so we decided to just take the metro back to the apartment, pick up some baguettes and eat in. Den got his baguette but I just scarfed some leftover comte and grapes from last night in addition to part of a magret saucission that we bought at the expo.  Den had a little nap and I surfed the net and we whiled away a few hours in our little Parisian apartment.  Sometimes a great trip is just about the down time as well as being on the go and "seeing" stuff.  We really haven't seen any notable tourist places in Paris this time, but our time here is more now about just wandering around with stops for food and wine, lol.  We still can't get enough of the little streets and and the fact that almost no matter where we end up, there's something beautiful to see.  Oh, and we kinda like the food too, :)


Our very kind landlord, Thierry had invited us to what he called his favourite little wine bar near La Bourse for a little get together with some of his regular clients.  We left the apartment a little after 4pm, intending to wander slowly through the Marais and into the 2nd, stopping along the way for a little expresso to give us a little boost.  We really took our time, exploring some little streets and some bigger boulevards and just being happy to be in Paris.  The air was much cooler than earlier in the week so the very chic Parisians had their fall finery out, including lots of leggings tucked into high black boots and of course the ubiquitous scarfs!

When we finally got to Passage Vivienne, we had a little trouble finding the place where we were to meet Thierry.  We were looking for a little corner wine bar ~ when we finally matched the address he had given us to the actual building we were happily surprised to find that the GTG was at Le Grand Filles et Fils, one of the premier wine caves of Paris!  They are well known for stocking very rare and expensive wines and it was a pleasure to be able to enjoy time in their beautiful environment.

Thierry had invited about 6 couples as well as his parents and his brother, who he works with.  His dad was in the wine business and his mom is a retired school teacher.  I spend most of the evening talking with this tiny, vivacious woman, who shared many intimate stories of her life with me, including the hardship her family endured during the war, her belief in hard work but also in the importance of family and her glowing pride in her husband and three sons.  She is one of the truly nicest people I have ever met and it was a priviledge to get to know her.  I told her that it has been our great pleasure to get to know her son and that she was right to be so proud of him, since he is a truly caring, honest businessman.  We enjoyed a few glasses of excellent wine, including a Saint Emillion that was a revelation.  We also got to know a few of Thierry's other clients, include a couple from San Francisco who have been renting from him for about 10 years and a couple from Australia and one from Vancouver.  The only thing we all had in common was our love for Paris and our admiration for Thierry.

It was such an honour to be invited to this intimate gathering and it will be a special memory for both Den and I for a long time. 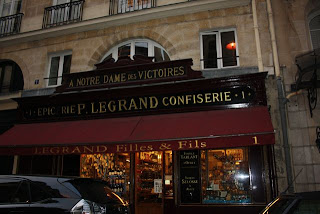 We had dinner reservations for 8:30 at Au Passages, a relatively new little wine bar in the 11th opened by some Spring alumni.  We reluctantly left our new friends and started making our way to our destination, strolling through the 2nd and 3rd arrondissments, taking our time and enjoying Paris once again.  You can probably tell by this time that we love to walk and only take public transportation if our destination is really too far away to walk to.

Au Passage is on tiny Passage Saint Sebastian off rue Amelot and if you didn't know it was there, you would never find it.  In my obsessive search for new eating experiences in Paris, it had come up several times on a few parisian food sites that are very reliable since they are hosted by locals and ex-pats who love all things related to the food and restaurant scene in Paris.  They serve a 4 course lunch for about 16 euros and the evening menu is mostly small plates (tapas) along with a nicely chosen wine list.  The decor is very eclectic, with mismatched chairs and tables, bare white walls decorated with little prints and start white lighting fixtures.  We were about 30 minutes early for our reservation but the place quickly filled up with very young, very hip locals.  We probably upped the average age of the patrons by about 20 years, lol.  There was a real buzz to the place once it was full, and we sat and ate our way through about 8 little plates and a lovely bottle of white Sancerre seemed to disappear easily through our almost 3 hours there.  We tried urchin for the first time (Den liked it so much, he ordered another portion), we had burrata which I mistook for belotta (maybe too much wine today?) but it was so good, served with an excellent olive oil and very smooth and unctious.  We tried bonites, which is a type of raw tuna which was out of this world ~ so silky and fresh, we also ordered another portion.  We had little cockles served over inky black squid ~ the bread we dipped in came out jet black.  Dessert was a little quennelle of chocolate ganache served over a pool of caramel sauce (oops, I think I just had an orgasm!) and fresh rapberries in a creme fraiche.  All these little plates were served in perfect intervals, giving us lots of time to talk, sip wine and take in the fun, kicky atmosphere.  I ended up talking to a young guy who sat at the bar and made his way through several courses.  He just finished an apprentice at one of the Michelin starred restaurants in Paris, Taillevent but has to return to the States for now due to Visa issues.  He is so passionate about food and told us that he worked 16 hour days at the restaurant but loved what he was doing and learned so much about French cooking technique.  He also said that he actually prefers these tiny places where the chefs are doing new inventive things with food and we talked about some of the places we've been (Spring, Frenchies, Papilles, etc) and he told us we had to try Le Chateaubriand.  Maybe next year! 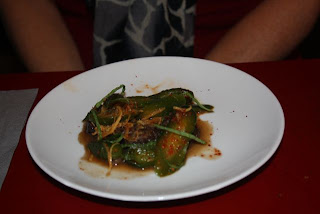 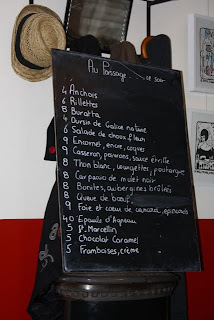 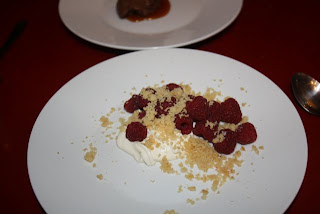 Dinner was a very reasonable 93 euros for all the food and wine and fun we had and we ambled home through the Marais and were home before midnight.  We didn't really do much today but walk around, eat, drink, and meet wonderful new people.  To us, that's a perfect day in Paris.

Tonight looks sunnier and cool and we have reservations at Chez L'Ami Jean at 1:30 with friends we met last year at Spring.  After that, well, who knows where Paris will take us today.
Posted by jo at 05:19